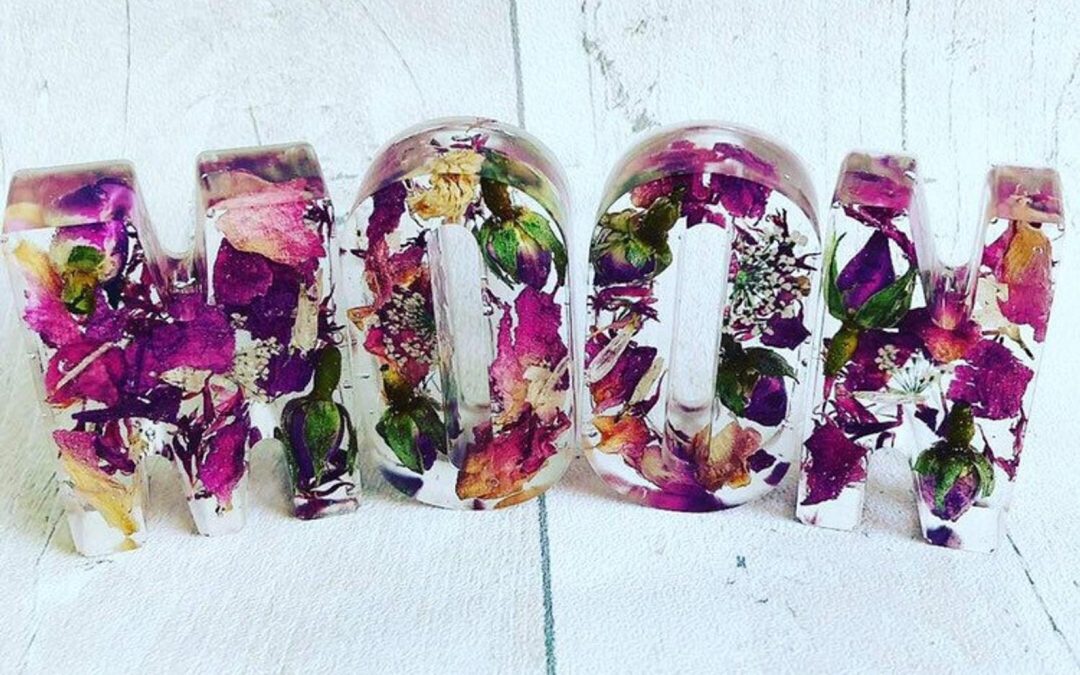 Resin letters are great! Why? Because they are pretty simple to make, have an absolute wow factor, and there is so much variety!

Because they are resin, it means you can make then clear as glass, look like stone, rock, metal, make them glittery, or all of that at once! The choices are almost endless, so lets’ look at a few examples before we jump into this project.

Resin is a Great Medium

I haven’t worked with resin for a few years, but I used to use it all the time. Remind me to show you the chess set I made my best friend one year.

Why is resin so good? It can be made to look like glass, with that amazing transparency, but it starts like a liquid, and sets solid. Imagine something made in resin, with something inside it. Maybe flowers, pebbles, something from a Kinder egg? The choices are almost endless.

In fact, you should see some of the amazing work produced by black wood co, as they make stunning tables out of old wood and resin. The resin easily taking the form of the knurled tree bark.

But what if you don’t want transparent resin letters?

Well, that’s fine too! There are loads of additives made for mixing into resin, that can make it look cloudy and magical, or like metal. You could mix together different colours, or just use one. You could make it look like ancient bronze, or marble.

The options are pretty limitless when it comes to resin, and making our DIY letters is no different.

So, let’s take a look at some examples I have found while tralling the internet.

Aren’t they quite stunning? And pretty straight forward to make once you have the resin and a mould for the letters.

So lets’ get on with the next bit! The MAKING!

How to make Resin Letters

Let’s get started with the DIY tutorial shall we? First things first, we are going to need a mould for the letters. Luckily there are plenty of silicone letter moulds out there for things like, ice cubes, or cake decoration and making sweets.

Silicone also happens to be an amazing mould for resin, as it is very rubbery making it an easy job to get the letter out once they have set.

Here are a few links to various moulds that I found, but be sure to have a look around. You want the letters to be beef enough for what you want the finished item to be.

So if they are going to be a colour, or glittery you could get away with smaller letters, but if you want o put things in them, such as flowers, stones, beads, or other nick-nacks, then you will need bigger letters to accommodate.

You could even make really big letters for say a wedding centre piece or display at a wedding, or other special event.

If you are after a simpler tutorial, one that you might be able to do with kids, why not look at making the with Polymer clay? We have a great idea over Clash of clans builder hall in Polymer Clay